Updated July 2017: To include the current understanding on How beta-cyclodextrin works?

Beta-cyclodextrin is a carbohydrate, and is one of three common derivatives sharing the same feature of a cyclic based physical structure. The other two are alpha-, and gamma-cyclodextrin. 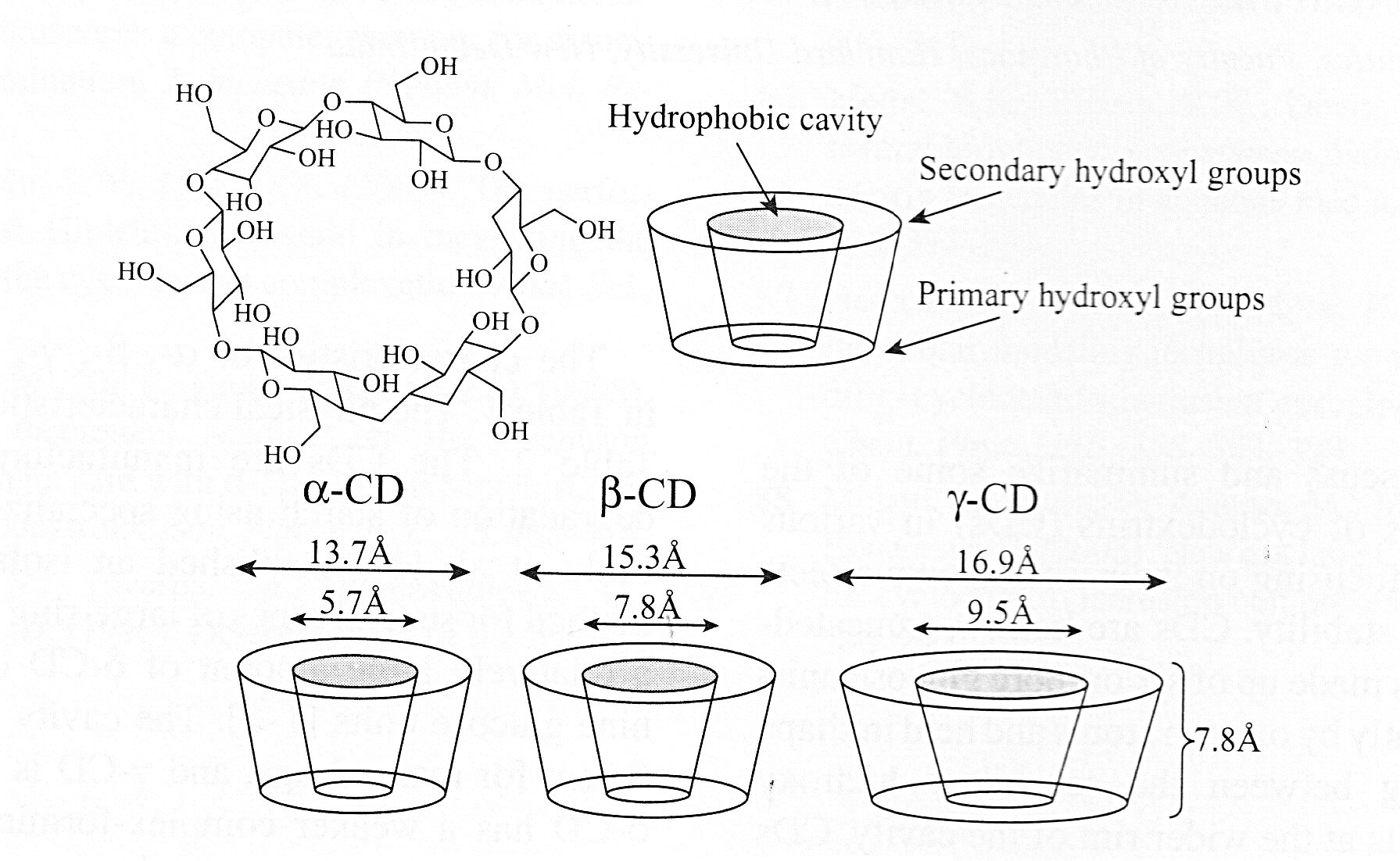 Background about Chemistry
Beta-cyclodextrin is found in a large number of industries. Its properties give it such widespread use in a number of industries: pharmaceutical as an excipient, small industry as a fragrance enhancer, and flavour modifier to disguise undesirable features, in textiles, in detergents, agriculture. Its wide usefulness is based on its combined chemical features of being soluble in water with exposed hydroxyl groups, and at the same time it is capturing hydrophobic compounds within its structure. It is best described as a ‘torus’, a short angular cylindrical structure based on 7 cyclic glucose molecules with a specific internal dimension of 6.2Å (narrow end) – 7.8Å (wide end) The combined solubilised components are termed complexes. Complexes are prepared by a number of different methods, and commonly when mixed with water (in high volumes) dissociate into the original components. Currently the average number of articles and scientific contributions on cyclodextrins are between 1500 -2000 per year. Derivatives of cyclodextrins (CDs) are used in the veterinary pharmaceutical industry within such well known brands (to veterinarians) as Convenia, and Saffan.

Is Beta-cyclodextrin a Veterinary Medicine/Drug?
There is a point when a carbohydrate is also a drug. This is when its use is put to a medical purpose in its own right, with verifiable facts to support its activity.
The definitions vary to some extent: ‘Therapeutic agent; any substance, other than food, used in the prevention, diagnosis, alleviation, treatment, or cure of disease’ (Farlex Partner Medical Dictionary © Farlex 2012). And from the Oxford Dictionary; ‘Medicine or other substance which has a physiological effect when ingested or otherwise introduced into the body.’ Beta-cyclodextrin is a carbohydrate which essentially is not digested by mammalian digestive enzymes. Nor is it absorbed. Beta-cyclodextrin as a therapeutic agent acts within the intestinal tract to provide a treatment for cryptosporidiosis (in calves). As KRYPTADE and EXAGEN are marketed with therapeutic claims it is not classed as nutraceutical, but as a medicine. This medical claim is not related to its prebiotic function, which is a nutraceutical feature of the compound. In the New Zealand veterinary market any medical claims made, need to meet a scientific standard of performance. The registered claims of KRYPTADE and EXAGEN underwent rigorous review by the New Zealand regulatory authority, the New Zealand Food Safety Authority (delegated to the ACVM) prior to registration in 2006, and 2007 respectively.

Beta-cyclodextrin is regulated in the Food Industry

Global Safety Assessment of Parent CDs for Food Use

How does beta-cyclodextrin work as an anti-cryptosporidial active ingredient?

There are at least three hypothetical methods by which beta-cyclodextrin is thought to support oocystocidal activity and reduce oocyst output. More research is needed to prove and define these but studies do show a direct link between beta-cyclodextrin and loss on oocyst infectivity as described below.

What is interesting, is its effects could be having a wide variety of different actions; from direct effects on the oocyst, to reducing a cofactor of excystment, and also interference with attachment itself.

One key feature of beta-cyclodextrin is not only its insolubility in water but rather its very strong tendency to dissolve in cholesterol. It is over 1000 more soluble in cholesterol than water.

Direct Effect on Oocysts:
In the more scientific supported studies, where there is direct contact between beta-cyclodextrin and oocysts, there is evidence of rapid loss of infectivity on oocysts (Castro-Hermida et al). These studies also show a direct effect of alpha-cyclodextrin on oocyst survival.

Indirect Effects on Ex-cystment:
There is also  indirect evidence of interaction between bile-salts and beta-cyclodextrin; bile salts are cofactors that aid the excystment of oocysts. Bile salts have similar characteristics to cholesterol, which have cholesterol as its base. In theory at least it is possible beta-cyclodextrin could be interfering with the excystment process, reducing the overall infectivity of oocysts.

Indirect Effects on Attachment:
Thirdly there is strong evidence that beta-cyclodextrin may alter the domains of the cell membranes to which oocysts attach before shedding their infective stages inside the oocyst(these infective stages are the ready-formed-waiting spherocytes).  The base membranes have a significant component of cholesterol as part of its chemistry, and beta-cyclodextrin is known to change the physical structure of those sites which have cholesterol in its structure. This is a much more difficult  proposal to study; this hypothesis will probably just remain that – an hypothesis.

NB: methyl beta-cyclodextrin MβCD (a more soluble form of beta-cyclodextrin) has been reported to interfere with bovine rotavirus entry into tissue culture cells as reported by Jin Cui et al: cholesterol depletion of the plasma membrane by MβCD had no effect on BRV binding to cells but significantly impaired BRV entry in a dose-dependent manner.