Aim: A double blind trial to examine whether a commercial electrolyte with added β-cyclodextrin will improve the rate of recovery of diarrhoea from natural field infections of Cryptosporidium parvum in a commercial calf rearing unit.

Background: Calves affected with cryptosporidiosis diarrhoea are reported to exhibit clinical signs typically lasting 7 days or more (Fayer et al 1998; Castro-Hermida et al 2002). Farmers offer supportive fluid replacement therapy until the calves start to improve. β-Cyclodextrin activity against Cryptosporidium parvum has been reported in vitro and in vivo in a range of species including mice, lambs, and calves (Castro-Hermida et al, 2000-2004). On many calf units infections are complicated with significant death rates attributed to mixed infections. β-Cyclodextrin is reported as ‘virtually tasteless’ and should be readily palatable to a young calf with reduced appetite.

Materials: Two electrolyte formulations were prepared, one a commercial isotonic electrolyte (“Enervade™”) with soluble dietary fibre (resistant maltodextrin) added (Ep) and the second being an identical electrolyte mix to which 10 gm betacyclodextrin was also added (EpBCD).

Method: A commercial calf unit raising 1600 Jersey/Friesian cross calves per year with a history of cryptosporidial diarrhoea presented 25 simultaneously diarrhoeic calves for the study. The presence of cryptosporidial oocysts was confirmed in cases prior to the trial, in subsamples of enrolled calves, and sentinel calves were also monitored to a limited extent for cryptosporidial oocysts and other pathogens associated with neonatal calf diarrhoea. The calves were typically aged 6 – 12 days of age, and weighed 24-32 kg. Treatments were blinded to both the herd manager and trial monitor and randomised. Following assignment, calves were placed alternately into one of two adjacent hospital pens and fed from communal electrolyte/milk feeders. Treatment started by withholding milk for 24 hours. Calves in each pen were then offered one of either electrolyte treatments at least twice daily for 24 hours according to “demand” (ie consumption rate). Calves were then offered milk twice daily to assess the return of appetite, and were fed milk if they desired, otherwise electrolyte was continued. Each group continued to receive the assigned electrolyte at least once daily over a three day period. Voluntary electrolyte consumption was encouraged. 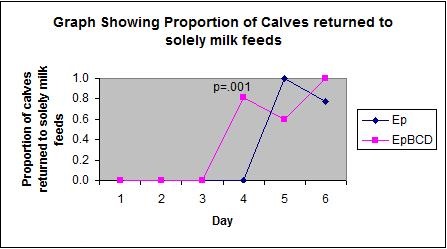 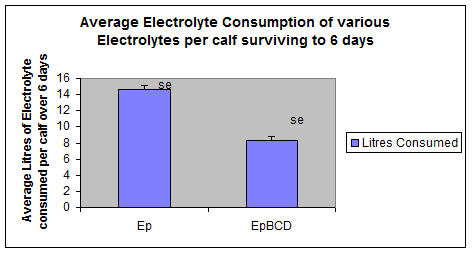 “*** Don’t know that this is important here – might be better leaving high impact statements alone at end. Some of this could go in the intro. Loss of appetite for milk feeds is common in calves with cryptosporidiosis, and is an important sign that increases weight loss and slows recovery. An improvement in the rate of recovery is an important factor for farmers in reducing the impact of this disease in calves. During recovery and at re-introduction of milk feeds some effort may be required to only offer small volumes of milk.”

Pauling, B.”A field report to compare the responses in calves with diarrhoea associated with cryptosporidiosis when treated with electrolytes with or without beta-cyclodextrin.” Proceedings of the XVI Congress of the Mediterranean Federation for Health and Production of Ruminants, Zadar, Croatia, 26 April 2008.. University of Zagreb, Faculty of Veterinary Medicine, 2008.

Veterinarians have been advised that energy content of electrolytes should be one of the major determinants to decide which brand of electrolyte to recommend to farmers for treatment of calves with scours (Schouten 2005). The basis upon which veterinarians choose to use high energy electrolytes is important and requires reviewing.
The opportunity to provide calves with higher energy to reduce weight loss while recovering from scours includes

The merit of high energy formulations (compared with isotonic electrolytes) also needs to compare recovery times, amount of electrolytes, ease of management, or the possible impact of secondary infections on mortality rates. Let alone the relative costs. An understanding of the underlying physiological responses of infections on the normal development and functioning of the various intestinal compartments is also required.

Milk feeding has been shown to maintain weight. But that this was achieved with a significant increase in labour either in management of milk volumes, or the provision of extra tube feeding with electrolytes (for rehydration). High energy (hypertonic) electrolytes may not be optimal for the fastest rate of re-hydration.

Energy alone does not determine the ‘ideal’ electrolyte.
This review is aimed to report on criteria defining differences between electrolytes.
END_OF_DOCUMENT_TOKEN_TO_BE_REPLACED